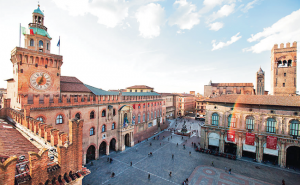 Event Description: A richly atmospheric place for a corporate teambuilding event, Bologna — site of Europe’s oldest university (founded in 1088) — is perhaps Italy’s greatest, little-known treasure. Situated half way between Florence and Venice, Bologna may lack the sheer quantity of “sights” of its more famous neighbors to the north and south, but it more than makes up for it in its absence of crowds and its authentic, medieval vibe. Arcades cover nearly every sidewalk in the old part of town; 12th-century towers jut out in unexpected places (twenty-two are still standing). And oh, the food! Bologna is clearly the culinary capital of Italy, and that’s saying something.

During your corporate teambuilding treasure hunt…expect to visit traditional trattoria and gellateria; a mysterious book publisher; a painted archway in plain sight; a frieze to fallen soldiers, and much, much more. Bologna is quite literally another world!

Gather in the Piazza Maggiore, near the Neptune Statue (of course).