In a recent article by Ross McCammon in Entrepreneur Magazine, titled “We’re Better Together, the author begins with a most provocative hypothesis:

“To collaborate with another person is to admit weakness.   There’s no way of getting around it. If you weren’t in a position of weakness, you wouldn’t need anyone else’s help.  When engaging in a collaboration, you’re saying, I don’t know how to do this on my own.  You’re both saying that. You’re co-failing, really.”

I believe this same dynamic is as true for teams as it is for partners, and 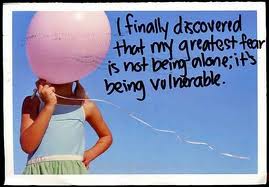 on a larger scale.  In essence, new group members come together to form a team because they’re acknowledging their weaknesses.  Working alone, each person cannot accomplish their desired task.  Working alone, they are all failures. Working together as a team, however, they have a chance to achieve success:  or at the very least, to fail a little bit less.

Now think about this for a second. What are the consequences of admitting that you can’t do something…of admitting a weakness?  Especially at work (but also at home), this kind of behavior can put you in a rather vulnerable position.  In a politicized corporate environment, for example, declaring “I can’t do this” could conceivably open the door for a co-worker to discredit you.   Or your boss might possibly respond, “Well, if you can’t do it, I can find someone else.”  Sad to say, these are unpleasant realities that we’ve all experienced.

So why do it?  Why place yourself in such a vulnerable position?  Why reach out to others for help?  Because, as McCammon notes in the title of his article, We’re Better Together.   Teams of people working together can usually accomplish more than one person can, working alone.  The key, however, is trust — and trust between people is built by allowing yourself to demonstrate this very same vulnerability. In other words, you come together because you are weak; you stay together by continuing to share who you are and admitting the areas where you are weak.

Although teamwork, according to McCammon, is certainly about vulnerability and admitting one’s failures, it’s not, necessarily, “about hugs”. The highest performing teams don’t always get along with each other like the best of pals, agreeing on every decision and finishing each others’ sentences.  In fact, collaboration is “harnessed conflict.”  States the author:

“It helps if your collaborator (teammate) is a person you don’t like all that much — or at least is someone with whom you’re always on the verge of arguing.  Tension can produce wonderful things. It has to.”

If you’ve ever performed in a theatrical production, you’ve no doubt seen this dynamic in action.  In the weeks preceding the performance, the players are at each other likes cats and dogs.  Tempers bubble over.  “Creative differences” threaten to pull the cast and crew apart. And then, miraculously, the curtain rises and the performance comes off without a hitch, almost like magic.  Notes McCammon:

“Sure, the tension of your differences might push both of you right up to the point of failure (the brink of doom, we’ll call it). But there are two reasons you’re not likely to go over…One, your fate is connected (by the handcuffs of mutual interest, for lack of a better metaphor); and two, because a lot of great ideas happen right before people fail–a kind of adrenaline kick.”

To be sure, there is much more to be said on the topic of team vulnerability and conflict. (Patrick Lencioni’s “The Five Dysfunctions of a Team” is a great place to start.) My own biggest takeaway from the Entrepreneur article is:  if you want change to happen, you have to surrender control.  “Control” is maintaining the status quo; control is continuing to do things the way you always have, ie. working alone and failing; control is denying your weaknesses; control is choosing teammates who won’t push or challenge you.

So what’s it going to be?  Are you going to be the stoic Lone Ranger, working without Tonto or a posse? And what’s the greater the weakness:  admitting you’re a failure at something, or continuing along that same, solo path, achieving the same, failed results?