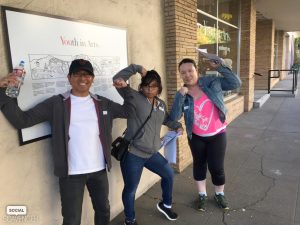 Event Description: Smack in the middle of Marin County, San Rafael has a bright and vibrant downtown area, with lots of history and public art. It’s a great location for corporate team building.

Location History: What is now San Rafael was once the site of several Coast Miwok villages.   By 1817 (four years before Mexican independence), it had transformed into a mission town, named after the Archangel Raphael — the Angel of Healing.  Things changed when the San Francisco and North Pacific Railroad reached San Rafael in 1879, soon linking it to the national rail network.  After the arrival of George Lucas in San Rafael in 1970 to film the movie THX 1138, the city became a center for the entertainment industry, particularly the high-tech elements of the business.  Portions of American Graffiti were filmed in downtown San Rafael under George Lucas’s direction.  Notable San Rafael resident include Carlos Santana, Jerry Garcia, Isabel Allende and Philip K. Dick.

During your teambuilding treasure hunt… expect to encounter a giant parking meter sculpture; a 1935 coffee grinder; the elegant St. Raphael Parish, a full suit of armor up high in a tower, and much, much more.

Click on the video below to hear more about this hunt, from Dr. Clue Founder Dave Blum

Gather in City Plaza, near the fountain.