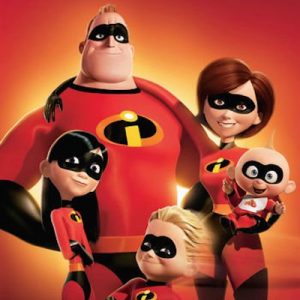 The summer movie season is upon us, and the first big blockbuster has landed: The Incredibles 2. Although I enjoyed the new film in a lot of ways, I2 has nothing on its predecessor, The Incredibles (2004). The sequel was a perfectly swell action film, albeit a little light on character development. But the original Incredibles –now that was movie! And best of all, it was ALL ABOUT TEAMBUILDING.

What follows is an article I wrote about The Incredibles over a decade ago, with an emphasis on what we can all learn from the film about teamwork, cooperation, and collaboration. Enjoy!!

From its luminous animation and cool 50’s retro art style to its rollicking succession of breath-taking cliff-hangers, Pixar’s wild and witty “Incredibles” is a film that will satisfy both kids and adults alike. Not surprisingly, it won the Oscar for best animated film. I would argue, however, that it was much more than just a great cartoon “The Incredibles” was easily the brightest, funniest, and most inspiring film of the year‹a multi-faceted teambuilding story with heart.

To start with, you have superhero Bob Parr, formerly Mr. Incredible, forced into retirement by a world all too eager to bring down its champions. Bob’s settled now, an insurance agent married to Helen, formerly the equally super Elastigirl. The two of them are firmly ensconced in the suburbs, raising a toddler and two teenagers. No one in the family is truly happy (except for the toddler, Jack Jack, perhaps). Not Bob, who dreams of his glory days chasing down bad guys, using his phenomenal strength and receiving recognition for his superpowers. Not Helen, a stay-at-home mom struggling to provide stability and security for a family to often uprooted by the requirements of anonymity. Not their son Dash, a super-charged speedster who craves a chance to excel at track; and not Violet, a shy teen with the power both to create force fields and to turn herself invisible– but who wishes merely to be noticed, particularly by the handsomest boy in school.

None of the four main Parr family members is living a fully authentic life a situation many of us might recognize in our workplaces. (“If only management would notice our potential and let us do what we’re good at!”) And, as is often the case with lives lived unexpressed, the Parrs are each filled with worries and concerns‹concerns that they keep mostly to themselves. Bob fears he is nothing without his powers; Helen fears she cannot ensure family security; Dash fears he’ll never get to shine in track; and Violet fears that, alas, she has no worth at all.

Enter the maniacal Buddy. Once spurned in his desire to become Mr. Incredible’s sidekick, Buddy grows up to become the evil Syndrome, bent on destroying all superheroes (Mr. Incredible in particular) and setting himself up as the last, true protector of the people. Bob and his family are soon thrust into a thrilling adventure careening wildly from Buddy’s secret headquarters on a faraway tropical island to a New York-like metropolis threatened by Buddy’s indestructible killer robot. In the end, as one might imagine in a family film like this, evil is defeated and goodness prevails. Although the final outcome may be predictable, what a wild and thought-provoking journey the Parrs take along the way –not only as a family, but (just as importantly) as a team.

In the first half of the movie, the Incredibles are your typical disorganized, dysfunctional, low-performance team. They are skillful neither at team unity nor at team efficiency. Let’s take a look at both team components:

1) Team unity, first and foremost, is about trust –the willingness to be vulnerable with your teammates and to be heard and supported by them in return. Bob Parr is your classic “stuffer”; he keeps all his worries inside and to himself. Rather than sharing his concerns and frustrations with his family, Bob packs away his fears way down deep, where no one else can see them. Rather than seeking out the support and aid of his loved ones, he races off on dangerous, secret adventures in an effort to prove his manhood. And isn’t this what members of low-performance work teams do as well! Instead of expressing their concerns and worries to their teammates, they keep their dissatisfactions close to the vest. These secret feelings, of course, tend to fester, manifesting in the workplace either as grumbling conversations at the water cooler or as rebellious, self-initiated projects that undermine the efforts of the group as a whole. How much better might things go if team members allowed themselves to be authentic with their feelings viewing co-workers as potential allies and resources rather than as obstacles or enemies. Trust, of course, is a two-way street. In order for people to take the risk of showing their true feelings, they need to know that their teammates will respect their concerns and will take them seriously, without criticism or recrimination. In short, they need to know that whatever happens, their colleagues care about their worries and are committed to supporting them, consistently, again and again and again.

2) The second component, team effectiveness has several important pieces, including:

The Incredible family begins their story as a team with conflicting goals and objectives. Bob and Dash, the extroverts, yearn to express their superpowers openly, gaining the world’s appreciation and admiration in the process. Helen, the protective mother, hopes for security and stability for the family, her goal being to convince the others to hide their abilities and to keep a low profile. Violet, the gawky teenager, is pretty much unsure of what she wants, apart from avoiding embarrassment. In such a conflicted state, the Parrs have little hope of becoming an effective team, a fact they soon realize when Buddy comes onto the scene with his evil intentions.

Faced with a crisis (Bob’s disappearance), Helen rushes off to save him‹with the kids unexpectedly stowing away in her jet. Helen, like many team leaders, lacks a clear and coherent plan. She leaps before she looks. Even worse, she fails to assess and make use of her two most important resources: Dash and Violet’s superpowers. So concerned is she with her dual priorities of rescuing Bob and keeping her children safe, Helen forgets that she has a team on her side: a team of super heroes, in fact. Helen is not alone in her rescue mission, a fact that soon becomes apparent when the family is captured.

As I said, the Parr family begins the story as a dysfunctional, unproductive, low-performance team. In captivity, however, Bob (the “team leader”) at last “gets real” with his family: a remarkable achievement for someone who is larger-than-life. Finally he confesses his fears: that he craves to be “super” again; that as strong as he is physically, he is not strong enough, emotionally, to lose his loved ones. Most importantly, he realizes that they’re all on the same team and that he needs everyone’s help. Helen, too, makes an important discovery: that by suppressing her children’s superpowers, she is actually putting them at risk. Soon the newly unified and focused Incredibles are off and running as a team, their escape made possible, in large part, to Violet and her ability to disappear from chains. The Parr’s team/family dynamic is vastly different now. Bob and Helen collaborate with their children; they are a team of “Supers” at last, a group of equals. When they enter their final battle against Buddy and his monster robot, they have a plan a plan that includes allowing everyone to contribute their special abilities to the fullest. Ironically, the eventual victory over Buddy is accomplished by the neglected fifth member of the Incredible team: their toddler, Jack Jack. To see the surprising way this plays out, you really will have to go rent the movie.

We all have worries and concerns that we can share with our teammates. We all have our own “superpowers” that need to be expressed if our teams hope to reach their fullest potential. Not every team gets the chance to fight villains and save the world. But they all have vital roles to play in their organizations. Give unity and efficiency a try in your teams at work; you’re in for an incredible ride.