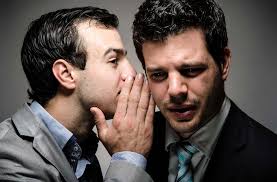 In his fascinating TED talk, “How to Start Changing an Unhealthy Work Environment”, psychotherapist Glen Rolfsen suggests that the best way to transform a toxic work environment is to put the kibosh on “back-biting”.

That sounds great, but what exactly is back-biting?

According to Wikipedia, backbiting refers to “slandering someone in their absence — to bite them behind their back.” The term originally references “an unsporting attack from the rear in the blood sport of bear-baiting.”

Not having attended a bear-bating session myself, I’ll define back biting as simply talking negatively about someone when they’re not physically in the room with you. It’s roughly equivalent to gossip, one of the more common behaviours in human society.

So why do we backbite?

Lots of reasons. We might backbite someone as an emotional release after a confrontation with them. By insulting and diminishing our enemy together with a confidant, we restore our own self-esteem. At the same time, we establish a bond with our confidant, especially if they’re receptive to our hostile comments. The enemy of my enemy quickly becomes my friend. And of course, as the purveyor of juicy gossip, we immediately become more “interesting” — at least in the short term.

On the flip side, back-biting can quickly devolve from a one-off emotional release to an office-wide, destructive habit, where everyone is gossiping and back-biting each other the second anyone leaves the room.

In the Bahá’í Faith, as well as Christianity, Islam and Judaism, backbiting is considered a sin. The Koran compares back-biting, again according to Wikipedia, to “the act of eating the flesh of one’s dead brother.” Now there’s a nice image for you!

Clearly back biting can be absolutely toxic in the workplace (and elsewhere), but how do you stop it?

Rolfsen apparently tried just about everything at his own work place: conflict resolution, group discussion, individual interviews, and even leadership coaching. Nothing worked.

1) Gather your group together and ask them the question: “Do you believe backbiting happens here?” This is an important first step. There’s no chance of behavioural change if people are in denial about the problem.

If a statement is untrue or ambiguous, does nothing good and is not useful, it’s probably back biting.

3) Ask the question, “Would you like to work in a team where there is no backbiting?”

4) Once you have buy-in, the final step is to challenge your team to an ambitious project: Starting from the new year, there will be no backbiting for 6 months! Write “Gossip2019” on a clipboard and have everyone sign it. Then, every week, you ask people, “How are we doing on Gossip 2019?”

According to Rolfsen, this really works! Absenteeism goes down, friction decreases, and productivity goes up

In our current world of bullying and incivility, Rolfsen’s method sounds like a worthy experiment. I’m going to try it with my team this January. Care to join me?

For more on this topic, here’s what the author, Dave Blum, founder of Dr. Clue Teambuilding Scavenger Hunts, has to say: