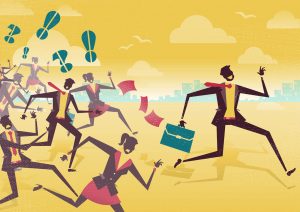 So you want to put on a scavenger hunt, huh? Well of course you do! Why wouldn’t you?!! Done right, a scavenger hunt is a superior way to build community, camaraderie and rapport in a fun, non-formal environment. Muck up your scavenger hunt, however, and you can kiss next year’s teambuilding budget good bye.

What follows are 7 ways to manhandle, bungle and in general mess up your next teambuilding scavenger hunt program, (with a few key solutions mixed in for good measure).

1) Don’t Playtest: This sounds like a no-brainer, but think about it for a second. Let’s say you’ve written a clue to a statue of Ben Franklin in the middle of San Francisco’s Washington Square. This statue has been here for decades. It would stand to reason that it will stll be here on the day of your hunt, right? Except…a week before the hunt, scaffolding is erected around old Ben, obscuring the sculpture completely! Alas, public art is not sacrosanct; things can change suddenly. Playtest your clues, as close to the hunt date as possible. If a clue location gets corrupted, your credibility will surely suffer! Imagine what happens if people can’t find their next clue location after that; they’ll just assume it’s once again your fault (rather than theirs), and there goes your credibility!

2) Neglect to tailor your clues to your clients’ demographic: Imagine your group is flying in from Brazil, China and Spain, and you write a hunt that’s all about American television shows from the 80’s. What do you think will happen? If you’re lucky, pop culture has spread to these countries and your hunt hunt participants will know all about Cheers and the Cosby Show. More likely, however, is that people will scream “Unfair!” and “This hunt is rigged for the locals!” No fun. Cater your clues for the participant demographic! If your group is international, focus on logic puzzles, word searches, and geography clues, and leave out pop culture entirely. If your team is all millennials (or younger), reference current pop songs or movies. If they’re all Harvard phds, make sure your clues are super HARD; if they’re all 15-year-old high school students, simplify the puzzles down a bit, or thow in an SAT question or two. The best case scenario for all hunts is that every team solves at least 75% of the clues and feels some success!

3) Allow teams to just follow each other: There are two types of scavenger hunt hunts — sequential and non-sequential. In the former, clue one leads to clue two, which leads to clue three, and so, all the way to a final location. In the latter, participants receive all the clues up front and can solve them in any order that they like; the team with the most points win. Sequential hunts can be a lot of fun, but they carry the risk that teams will just follow each other. If you’re going to do this kind of hunt, you’ll want to give each team a different clue order (which can be a pain), or stagger the start times. Non-sequential hunts are less problematic. Teams will be going to the same locations, but in the order of their own choice. Whichever model you choose, think ahead to avoid “follow the leader”.

4) Offer the wrong kind of prizes: A scavenger hunt needs to have fabulous parting gifts, right? Not necessarily. Scavenger hunts are most often team events — but these teams are not necessarily intact, ongoing social groups. Very often, we bring people together to take part in the hunt, then afterwards, they go their separate ways. The last thing you want to do is give the winning team the prize of a restaurant coupon for a nice meal. Similarly, a big bottle of wine, or a cake, may sound like fun, but who knows when people can come together again to consume their prize? It’s much better to give each winning team member their own small gift that they can enjoy on their own — like, say, a Starbucks or Amazon gift card. Or better yet, how about a joke gift from a dollar store? At Dr. Clue, we always offer winners the traditional dinosaur hats — they’re fun, wacky and not-too-serious, minimizing the chance that the non-winners will experience a feeling of scarcity. In short, make it light and people will have more fun.

5) Over-emphasize competition: On the one hand, competition can be fun and motivating, leading to energy, high spirits and good-natured ribbing and teasing. On the other hand, when over-emphasized, competition can most certainly go sideways, resulting in taunting, cheating, and even team sabotage. We’ve seen it all! If you’re going to emphasize competition, consider minimizing the prizes (see #4 above). Better yet, ask teams up front to visualize what a “successful day” might look like, regardless of the results. (ie. fun, getting to know each, taking an irreverent walking tour on a beautiful day, etc.) At Dr. Clue, we in fact never say the words “winners”, “losers” or “competition”. We simply encourage participants to, “try to get a perfect score and set the world’s record!” In this way, the competition is against a standard or milestone, rather than against each other. Try it!

6) Neglect the debrief: If you’re audience is merely an informal social group, (with winners/losers/prizes), then a debrief after your hunt may not be necessary; participants just play the game, learn the results and depart. A teambuilding scavenger hunt, however, is a different animal; there has to be a debrief of some kind, where you relate the hunt experience to participants’ personal or professional lives. Consider asking four different kinds of questions, along the lines of 1) What did you feel during the hunt? 2) What exactly happened, and why? 3) How does this parallel your experiences in the workplace 4) Based on the hunt today, what might you do differently when you go back to your office lives? Another important part of any debrief is a participant feedback activity, where people express appreciation for their teammates’ specific contributions. Without a debrief, a teambuilding scavenger hunt feels very incomplete: like a book without the final chapter.

7) Miss the opportunity for cross-team collaboration: Generally speaking, what’s the object of a teambuilding program? The answer is: “lots of things” — including raising morale, boosting communication, and raising the trust level. To that list, please also add “breaking down cliques”! We humans are tribal creatures. Put us on a team, and we’ll bond quickly — against a common enemy. The problem is, the other teams aren’t really your enemy; they’re your co-workers; you have to work with them when the game is over! In reality, you’re all part of a larger team — whether it’s your department, your division or the whole company. The way to remedy clique-ishness this is to include a few cross-team-collaboration clues in your hunt, where teams have to work together with one or more teams. For example, you can have a clue where people have to swap resources in order to succeed. Perhaps teams have to trade baseball cards, or barter their own decoder sheets for ones they don’t have. Whatever you do, make sure that you stress the importance of cross-team collaboration in your post-hunt debrief. It’s a great busines lesson — that even in the most competitive-seeming situations, partnership is always advantageous, if you can think outside the box!

For one more thought on this topic, listen in with Dave Blum, founder of Dr. Clue treasure hunts: