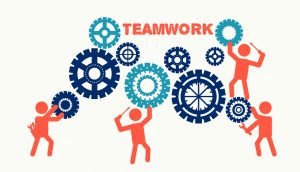 Before jumping into a comparison of Scavenger Hunts vs. Escape Rooms, let me clarify what teambuilding is.

Our terms defined, let’s jump back into our comparison of scavenger hunts vs. escape rooms.

By our definition, an escape room is almost always a team bonding event while a scavenger hunt is more commonly a team building.    Let’s break this down a bit.

Are scavenger hunts, then, superior to escape rooms?   Not necessarily.   It all depends on what you’re looking for.

If what you need is a short, fun team experience where you’re immersed in a story (like stepping into a movie), then escape rooms are a fantastic choice.    They are definitely brainier than the typical “team bonding” activity, such as go-karting, bowling and mini-golf – all of which provide less intellectual interaction.     There is no question that a well-designed escape room is a stimulating, enjoyable experience, not to be missed.   Just keep in mind that it really is a team bonding rather than a team building.

If, however, you want a high-impact “team building” event – where participants really get to know each other’s strengths, weaknesses and social dynamics – then a professionally-run scavenger hunt is the way to go.

The key is asking yourself, “Do I need a team building or a team bonding?”

Listen in as Dave Blum, President and Founder of Dr. Clue, talks about the difference between team bond and team building, and between escape room and scavenger hunts.