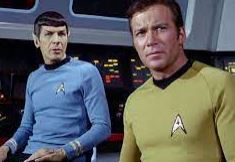 “Ensign Smith here. What’s that? Kirk and Spock want me to go on an away mission to planet Theta Epsilon 6? Great!  I’ll meet you at the transporter room.”

Closing his Communicator, Smith’s eyes widen with a sudden realization:

You would think that ensigns like Smith would simply request a different colored shirt:  “Uh, that’s not really my color.  I’ll take the lime green jersey, thanks.”

Or they would just refuse away missions:  “Let me check my calendar, Jackson.  Oh sorry – I’ve got a very important dentist appointment today.  Can you cover for me?”

And yet, Red Shirts keep going on these missions and they keep expiring in extraordinary ways. Why do they do it? I propose it’s because they trust their executive leadership.  They trust Captain Kirk and Mr. Spock with their lives—literally!

Today, I’m going to explore the concept of trust, Star Trek-Style.  What is trust, exactly?  Why is it important?  And how come Kirk and Spock are so darn trustworthy?

When it comes to trust, there are five key elements to bear in mind, represented by the acronym:
T-R-U-S-T.

Are Kirk and Spock trustworthy in all five trust capacities?   Let’s put both of them to the “trust test”, shall we, starting with the first trust factor:  “Talent”.

Kirk is clearly a talented and competent captain.  He can see the big picture when others cannot. His leadership style is emotional and intuitive.  He acts with his gut, and his gut is usually right.  “Scotty, we need to fly right into that super nova.”  “But Captain, that’s crazy!” “Just do it Scotty!”

Spock, too, is a competent leader. As chief science officer, he’s highly analytical.  He can do stats in his head to the nth degree.  “Captain, our chances of survival are 3.2767%.”

Both Kirk and Spock are competent in their own way.  Let’s call the competence category a push. One point for Kirk, one point for Spock.

The second trust factor is reliability.   Kirk is definitely a man of his word.  If he says he’s going to interrogate that pretty alien girl, he’ll do it—twice — just to be sure!

Spock, too, is rock steady.  He’s efficient to a fault. If he says he’s going to do something, he’ll do it.

Let’s call this category another push.  One more point for Kirk, another for Spock.

The third trust element is understanding and caring.  In this area, Kirk has the clear advantage.  Although he holds people to high standards, he also has access to his empathy.  He’s a man of feeling.

By contrast, Spock struggles with expressing and feeling emotion.  if you say or do something illogical, he’ll correct you sternly.  Let’s give the “empathy and understanding” point to Kirk.  That’s Kirk with 3 points, Spock with 2.

The fourth trust element is sincerity.   I’d say both Kirk and Spock are straight shooters.  They say what they mean and mean what they say. Let’s call sincerity another push.  That’s 4 points Kirk, 3 points Spock.

The fifth and final trust element is transparency and vulnerability.  Now Kirk, he’s pretty much an open book, isn’t he?  When he’s scared, excited, or happy, you can read it on his face. When Kirk says (in his unique acting style): “I’m – in – love – with – an – alien – from – triskelion,” you know it’s from the heart.  (Or perhaps a little lower.)

Transparency is much tougher sledding for Spock.  Like a poker player, he keeps his feelings close to the vest. Spock is a Vulcan after all.  He’s all about logic. Kirk definitely wins transparency and vulnerability point.

Checking the final tally, Kirk is the clear trust winner, 5 points to 3. The difference between the two men comes down to emotion.  We trust people who are vulnerable and transparent. We trust people who demonstrate that they care about us, and don’t hold it back.

Does that mean that Spock is “untrustworthy”?   Not at all.  Spock is competent and professional. He’s reliable, and he tells the truth.  You want to have him on your team!  You just maybe don’t want him as captain.

In summary…
I outlined the five trust factors, namely:

And I designated Kirk as the most trust-worthy officer on the Enterprise.
Now let’s check in on our Red Shirt to see how he’s faring on his away mission.

“Away Team Leader Smith checking in.   Yes, I’m here on the planet.  All is clear. Hey wait, why is that giant plant staring at me?  Are plants supposed to have eyes?   And sharp teeth? Beam Me Up Scotty!!!