Be the Indy Jones of Your Life

Be the Indy Jones of Your Life 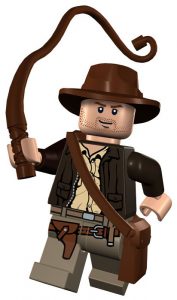 Okay, I’m not really Indiana Jones who is, of course, a fictional character played by a real actor (Harrison Ford) in a fictional movie (Raiders of the Lost Ark).

But wouldn’t it be great to somehow be Indy for a day?  Racing giant boulders.   Facing down bad guys.   Solving clues and searching for hidden treasure.

In case there’s any doubt, Raiders of the Lost Ark is one of my all-time favorite movies, and not just because it’s a truly awesome action movie.    What I love about Raiders is that it’s also one of the greatest treasure hunt films of all time!    And I LOVE treasure hunts.

Today I’d like to share with you a few details about my life-long passion for treasure hunts…not just in movies but in the real world as well!   I’ll then share a few clues about what a treasure hunt is and isn’t, and most importantly, how you, too, can become the Indiana Jones of your own life!
But first, let’s wind back the clock a bit.   I was about 10 years old when my Dad first introduced me to the treasure hunt genre.  Night after night, I’d climb into bed, pull the covers down over my head, and read late into the night the adventures of Sherlock Holmes and Dr. Watson, Jim Hawkins on Treasure Island and Charlie Bucket searching for Willy Wonka’s Golden Tickets.  (Yes, that’s a treasure hunt story, too.)  I thrilled to movies like Romancing the Stone, It’s a Mad, Mad, Mad, Mad World and the Goonies. And of course, Indiana Jones.

I lost many hours playing and solving jigsaw puzzles, board games and crossword puzzles.   I even created my own hand-drawn mazes.
In short, I became a puzzle and game geek – prerequisites for a future treasure hunter.

Fast forward now to 1995.   At a career crossroads in my life, I was casting about for a new direction in work when my friend Scott suggested, “You like treasure hunts.  Why don’t start a business doing that?”  A crazy idea, sure, but I figured “Why not?  It’s not like I have to quite my day job.”  So I ran with it, creating my first hunt event in Golden Gate Park for a bike club of which I was a member.  The hunt was a hit – I received some praise — and needless to say, I was hooked.   And why wouldn’t I be?  Here was a way to make money doing what I love to do:   traveling, writing puzzles, and having mini adventures!  What could be better than that?

But still I didn’t quit my day job…that didn’t happen for another five years, during the dot com boom.  I did, however, write a business plan back in 1995 — and Dr. Clue Treasure Hunts (my corporate team-building, treasure hunt business) was born.   To my amazement, Dr. Clue is still going strong after 26+ years.  What a crazy adventure it’s been!

Now at this point, you’re probably wondering, “What exactly is a Treasure Hunt?  Is that the same thing as a Scavenger Hunt?” Great questions, and no, the two different kinds of hunts aren’t the same thing.

Scavenger hunts are what we did as kids, where you receive a laundry list of objects to go out and “collect”.   At the end of the day, the “hunt master” counts up all the found objects and proclaims the person with the most items the winner.

By contrast, in a treasure hunt you’re not looking for objects on a list. Instead, you’re solving cryptic clues leading to mystery locations scouted out in advance by the treasure hunt master.  In a scavenger hunt, the challenges are pretty straight forward…essentially checking things off a list.  In a treasure hunt by contrast, the clues are much more “obscured”, often obfuscated in the form of word puzzles, picture puzzles, trivia, Morse Code, Braille… the whole kitchen sink.  Most importantly, a treasure hunt is site specific. When you solve a clue, the secret message gives you directions to a specific place within the treasure hunt area.  In essence, you’re following a trail of bread crumbs from location to location, all planned and laid out by the treasure hunt master.
Within the treasure hunt model, there are two sub-types:  sequential & non-sequential.   In a sequential hunt, clue one leads to clue two, two leads to three, and so on, all the way to a final location. The first person (or team) to reach the end wins.  This is hunt model you see in pirate stories, the Amazing Race and some of the movies I mentioned earlier. In a non-sequential hunt, however, you get all the clues up front; each clue stands alone and is worth points, based on difficulty. Clues can be solved in any order that you like, and the person or team with the highest score wins.  This type of hunt offers the advantage that people don’t just follow each other.  Moreover, if you get stuck on a clue, you can skip it and move on to another one, coming back to the stumpers when you have time.

As a personal preference, in books and movies I prefer sequential hunts.  I particularly enjoy watching movie and TV characters competing (and conflicting) in an environment of scarce resources and even scarcer information!  When I RUN a treasure hunt, however, I prefer the non-sequential treasure hunt model.  I find it offers a bit less conflict, a bit less scarcity, a bit less cut-throat competition.  Not every treasure hunter would agree with me, but hey – I’m running a team-building not a team-destructing company. 😊
Treasure hunts are certainly a fun, even thrilling recreation.  But I believe there’s much more to the model than that.
In my opinion, treasure hunting is a way of being, a way of looking at the world, a way of life.

Contrary to the archetype of the lonely adventurer, defying all odds on a solitary journey, treasure hunters are rarely lone wolves!  Even a curmudgeon like Indiana Jones needed to put together a team to find the Lost Ark.  By taking care of others and nurturing teamwork, Indy I believe became a better person.  In short, he got a clue about leadership!
Imagine how your life might change if you treated every day of your life as a thrilling treasure hunt!  Imagine the fun you could have!
I once taught a group of eighth graders in San Francisco’s Tenderloin district how to create a treasure hunt in their neighborhood.   At a certain point, I asked the class how they might use treasure hunts in their daily life.   A hand shot up in the air; it was Shelley, an African-American girl of 11, her hair in tight braids, with the most angelic face you’ve ever seen.

“Yes Shelley. What would you do?”
“I’d hide my parents’ cell phones and make them do a treasure hunt to find them”
“Well, that sounds interesting.”
“And they’d have to pay me for each clue!”

Now that’s entrepreneurship at its finest!
I believe that you, too, can lead a life of mystery and excitement — and you don’t have to go to India or Egypt (or the Tenderloin) to do it.
All you need is an adventurous attitude — a mindset that proclaims, “I’m up for whatever puzzles life tosses my way, and with the right people around me, the treasure will be found!”

Get a clue my friends!  And don’t forget your whip and your fedora.