A fun place to hold a team building activity in Calistoga 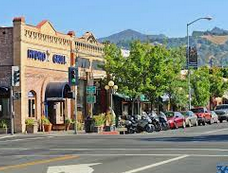 Event Description: During this treasure hunt adventure, you’ll solve clues up and down the Calistoga downtown area.

Once the home of the Wapoo tribe, Calistoga was settled in the 1840’s and led by Sam Brannan, publisher of San Francisco’s first English language newspaper.   Brannan purchased 2000 acres of land in 1885 to develop a spa reminiscent of Saratoga, NY.   The spa opened in 1862 and, with the completion of the railroad in 1868, became a destination hub for the upper Napa Valley.  The name, Calistoga, came from Brannan’s famous malaprop that he would make this “the Saratoga of California”, which actually came out “the Calistoga of Sarafornia”.

During your hunt:  Expect to encounter…a beautiful mural alley…old train cars…mud baths and geysers…a froggy fountain and much, much more.

Gather at the Labyrinth.